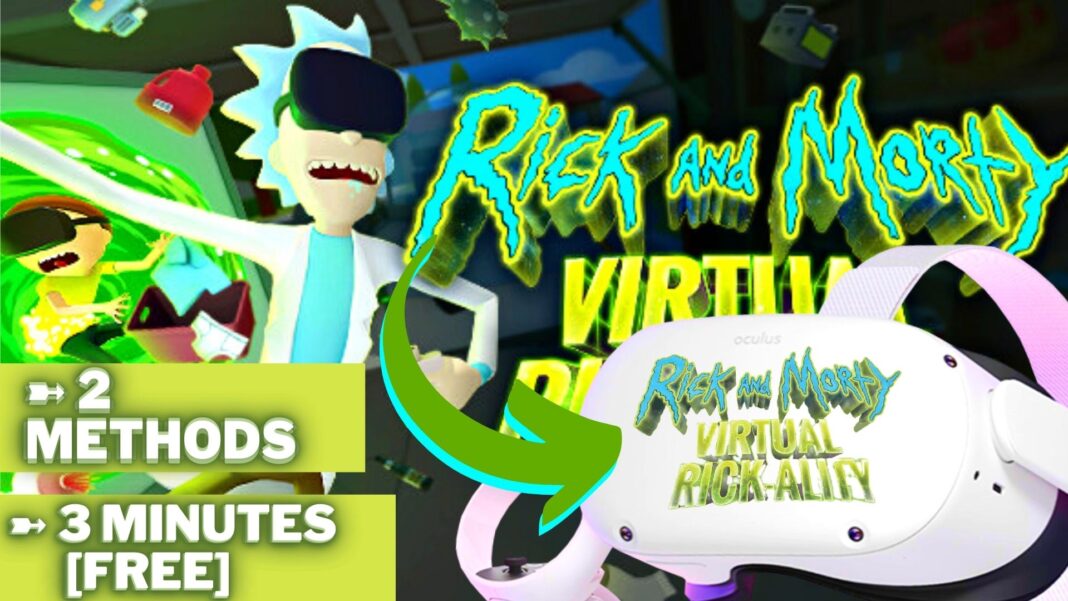 Rick and Morty: Virtual Rick-ality is a VR game that lets you step into the world of Rick and Morty. You’ll be able to explore Rick’s garage, visit alien worlds, and even enter Rick’s portal gun to travel to different dimensions.

The game is filled with Easter eggs and references to the show, so fans of Rick and Morty will be in for a treat. And even if you’re not a fan of the show, you’ll still have a blast exploring all the different worlds that the game has to offer.

Don’t worry, we’ll show you how to play Rick and Morty VR on your Oculus Quest 2 wired and wireless in this step by step guide.

So put on your Oculus quest 2 and get ready for some Rick and Morty: Virtual Rick-ality!

A MUST Read: How To Get & Play SKYRIM VR On OCULUS QUEST 2

How to Play Rick and Morty on Oculus Quest 2?

There are two ways using which you can play Rick & Morty on Oculus Quest 2 that are Oculus Link; the wired method and the 2nd one is Air Link; the wireless method.

We recommend the wireless method because it eliminates the wires and gives you the complete immersion.

First, check your Oculus Link Requirements to see if you meet the minimum requirements for the Oculus Link and the Air link, now there are two ways to play Rick and Morty on Oculus Quest 2

Can You Play Rick and Morty On Oculus Quest 2 Using Oculus Link?

Yes, you can play Rick and Morty On Oculus Quest 2 Using Oculus Link. Here’s how:

As Oculus Link is a Wired Method, the gameplay you get is uninterrupted and you don’t get any Lag or drop in the frame rates but it can be limiting sometimes because you can’t move around freely.

You can depend on Oculus Link to give you a strong experience with no latency till the end.

Can You Play Rick and Morty On Oculus Quest 2 Wirelessly?

Yes, you can play Rick and Morty On Oculus Quest 2 Wirelessly and for FREE using Oculus Air Link. Here’s how:

Your experience using Air Link to stream PCVR games on your Quest varies depending on the game itself, your computer specifications, and mainly your router

The WiFi connection must be 5Ghz if you want to play Rick and Morty Wirelessly. I personally recommend having a specific router like the ASUS AX5400 in which only your Meta Quest 2 is connected.

Something as simple as a wall in between your Quest and your router might create chaos with the wifi signal from time to time.

So If you have Amazing WiFi speed and there’s no distraction to block your connection between your Quest and WiFi, then you should definitely go for Air link.

(Please watch the embedded video below, to perfectly activate The Oculus Air Link)

Can’t Play Rick and Morty On Oculus Quest 2? Then Here’s The FIX:

You can watch the embedded video below or you can read the steps:

So there you have it! You can now officially play Rick and Morty on Oculus Quest 2 using either Oculus Link or Air Link.

Rick and Morty: Virtual Rick-ality is a must-play for any fan of Rick and Morty, and is sure to provide hours of entertainment. VR Gamers will especially appreciate the attention to detail that has been put into making this game a truly immersive experience.

After all, what could be more fun than exploring the world of Rick and Morty in virtual reality?

Don’t forget to leave us a comment below letting us know what you think of Rick and Morty or if you have any suggestions for future content.

Finally, don’t forget to subscribe to our YouTube channel so that you never miss out on another exciting VR gaming tutorial. Thanks for reading and we’ll see you in the virtual world!