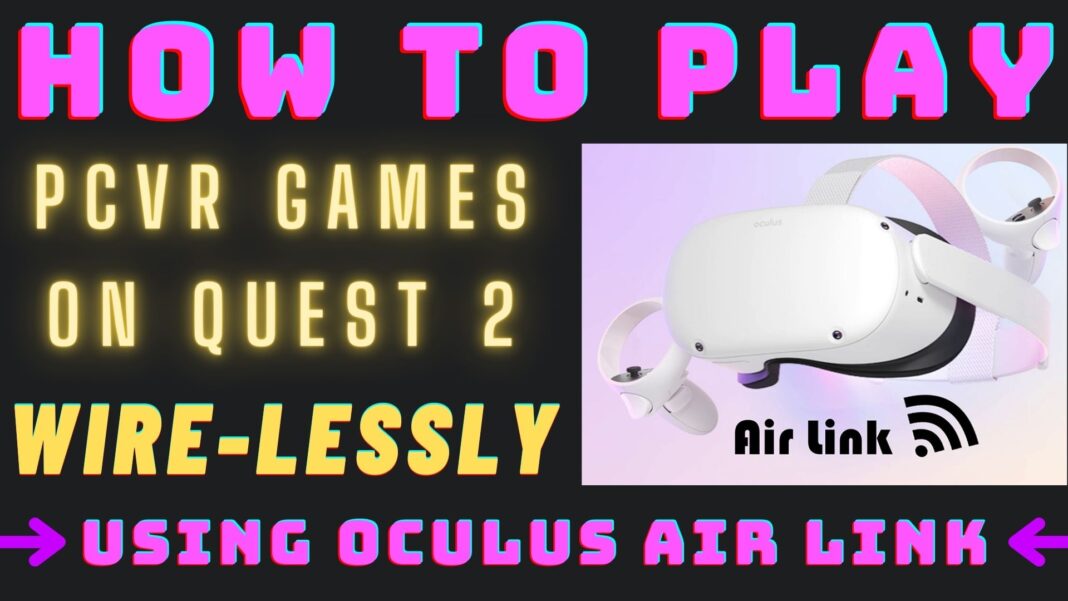 Oculus Air Link has arrived with the V28 in an experimental phase.

With the Oculus Air Link, Facebook allows the Oculus Quest 2 (only) to wirelessly access the entire SteamVR catalogue and that of the Oculus Rift.

Until now it has been possible to do the same for $19.99 with the Virtual Desktop application, it is important to emphasize that the Air Link function is completely free.

Thus, Air Link is an application made by the developers of Facebook and will end up being better than any other application.

How To Activate Oculus Air Link?

Using Air Link is frankly simple, to get started, first download the Oculus application for PC by clicking here.

Once installed, check that it is indeed version 28 by going to the “Parameters” menu as well as the “General” tab. You will then see the number corresponding to the version of the application at the bottom.

Finally, still in “Settings”, select the “Beta tab” where you can activate the Air Link option. (Refer to the image)

The next steps take place on the side of the Oculus Quest 2.

First, turn on your Oculus Quest 2 and go to the “Settings” menu then “Experimental”.

If your virtual reality headset also has version 28, then you’ll see the Air Link option that you just need to activate.

Now all you have to do is log into your PC. To do this, you must go to the “Quick Actions” menu (still in the settings) and select the “Oculus Air Link” option that has appeared.

After a few seconds, the Oculus Quest 2 and the PC will be found, which will then allow you to land in the Oculus Rift interface.

You can access the feed settings directly from the dashboard, you will find the menu on the far left.

You will notice that two settings are offered; Dynamic and Fixed with values between 10 Mbit/s and 200 Mbit/s.

Roughly speaking, in Dynamic you will keep better latency in games, but you will risk obtaining a reduction in visual quality (blur, artefact, etc.).

By opting for the Fixed setting, you will be able to significantly increase the visual quality, which will have the consequence of increasing the latency. You can do your own experiment with the settings and select your favourite settings

If you had previously changed the “Encode Bitrate” value in the Oculus Debug Tool, remember to reset it to 0.

Finally, remember that it’s an early access feature that is under development and that continues to be improved.

I can’t find Air Link on my Oculus Quest 2 What Do I Do?

This problem has been one of the most reported by users. First of all, keep in mind that Air Link is not available for the first version of Quest.

If you have version v28 of Oculus Quest 2 but Air Link does not appear in the Experimental Functions menu, you just have to click on “Reset Experimental Options Settings”.

On the contrary, if it appears in the viewer but not in the desktop application, you just have to log out of the application and start it again, if we have V28, the function will appear in the Beta tab.

And after doing all the steps mentioned above and even now the Air Link option is not appearing, in that case, you will have to wait for Oculus to finish activating it for your device.

What Is Oculus Air Link And How It Works

This new function of Oculus Air Link is a communication technology between the hardware of our computer and the software of the Oculus Quest 2.

This entire system runs wirelessly via a WiFi connection. Unlike Oculus Link which did the same function through a directly connected cable.

This is a great saving for us since the only thing we will need is a WiFi connection and not the official or compatible cable.

What did you think of this article? Have you tried Oculus Quest 2 with Airlink? Do not forget to leave your comment.

Finally, if you are interested in the world of Virtual Reality, take a look at our other articles and go to our YouTube Channel and stay tuned for future tutorials